A cookie is information stored on your computer by a website you visit. Cookies often store your settings for a website, such as your preferred language or location. This allows the site to present you with information customized to fit your needs. As per the GDPR law, companies need to get your explicit approval to collect your data. Some of these cookies are ‘strictly necessary’ to provide the basic functions of the website and can not be turned off, while others if present, have the option of being turned off. Learn more about our Privacy and Cookie policies. These can be managed also from our cookie policy page.

IE10 and below are not supported.

What are your concerns? Fixing Stillwater Streets: $25.9M Budgeted 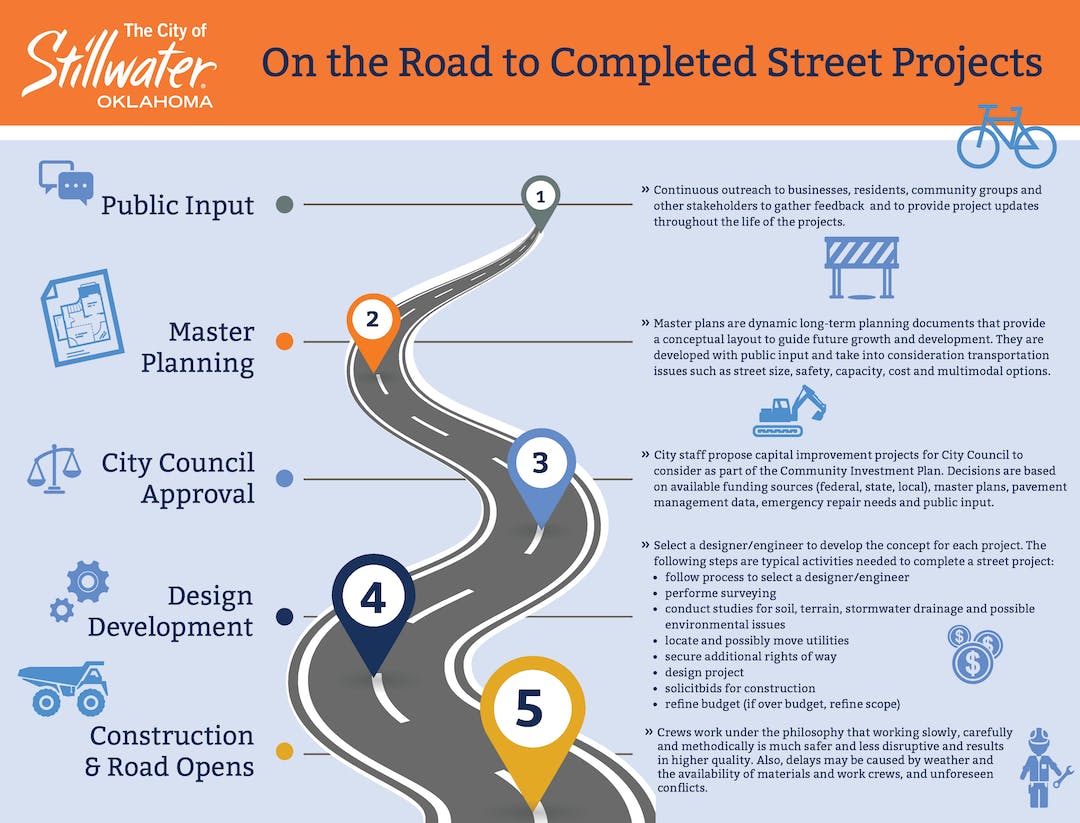 Ask just about any resident what would you do to improve Stillwater, and the answer will be “fix the roads.”

What would surprise most is that from July 1, 2016, through June 30, 2020, the Stillwater City Council has appropriated $25.9 million for capital projects to do just that.

Capital transportation projects are major street reconstruction projects, ranging from sidewalks, bridges, stormwater drainage, milling and repaving, to full reconstruction of the roadbed. They are essential to keep the City’s infrastructure in a state of good repair.

The City of Stillwater plans, funds and oversees construction of capital projects; however, someContinue reading

Ask just about any resident what would you do to improve Stillwater, and the answer will be “fix the roads.”

What would surprise most is that from July 1, 2016, through June 30, 2020, the Stillwater City Council has appropriated $25.9 million for capital projects to do just that.

Capital transportation projects are major street reconstruction projects, ranging from sidewalks, bridges, stormwater drainage, milling and repaving, to full reconstruction of the roadbed. They are essential to keep the City’s infrastructure in a state of good repair.

The City of Stillwater plans, funds and oversees construction of capital projects; however, some of the projects are in conjunction with partners like Oklahoma Department of Transportation, Payne County and Oklahoma State University.

The $25.9 million for transportation projects and programs is broken down as follows:

What is pavement management? After investing in repaving and repairing streets, the City also takes steps to keep that pavement in good shape as long as possible. To do that, the Pavement Management Program (PMP) identifies, prioritizes and recommends maintenance strategies (preventative maintenance, rehabilitation, reconstruction, deferred maintenance) for each street based on their condition and use. Funds were allotted in FY17, FY18, FY19 and FY20 for a total of $11.6 million.

In addition to planned bridge projects (which includes 3rd Avenue over Boomer Creek and Husband Street over Boomer Creek), the City also had to budget for an emergency repair for the bridge on 26th Avenue that was damaged in the floods earlier this year.

Street projects included in the FY2020 budget are as follows:

So how are street projects selected? Street projects may be part of general concepts in some of the City’s Master Plans or are considered because of public input gathered through various platforms.

If a street is to be modified, the following steps have to take place: selecting an engineer, surveying, studies, locating and possibly moving utilities, securing additional rights of way, design work, call for bids for construction, refining the budget and possibly going back to council if the budget exceeds the original appropriation.

Also since 2016, staff has followed the Multimodal Transportation Policy when street projects are considered. Multimodal (also called active or alternative transportation) calls for street designs to incorporate the needs of multiple users (not just vehicles), which may be the addition of or the improvement of sidewalks and bike paths.

$6.1 Million for Joint Projects with ODOT

The City of Stillwater often partners with the Oklahoma Department of Transportation (ODOT) on street projects.

Many people don’t realize this, but 6th Avenue (SH 51) and Perkins Road (US 177) are maintained by ODOT. ODOT is responsible for planning, funding, repaving, striping, removing snow and ice, and filling potholes.

However, the City is an active and involved partner for projects that ODOT is working on within city limits. In addition to the highways themselves, ODOT works to improve access to them—even on city-owned streets.

Current joint projects include the following:

But what about potholes?

The City’s Public Works Department is responsible for filling potholes and that does not come out of the $25.9 million. The City takes care of the potholes, restriping and other needs that residents call in as problems. Report a pothole or other street issue here.

The remainder of the $25.9 million are tools that help improve the streets as well. This includes the following:

City of Stillwater’s transportation money comes from a variety of funds.

Also, we welcome questions, comments and pin drops on the map below. What are your concerns?

This page is meant to function as the hub of civic engagement for this project. Feedback is shared with City Council and city staff. Comments made on this page, as well as any comments made to city staff through email, are considered public documents. For questions about this, click on "Who's Listening."

On this map, you can drop a pin, leave a comment and/or upload a photo. Your comments will be shared with Stillwater City Council in a report with the Quartely Financial Report.

Inform: Give information to the community

Consult: Get feedback from the community